In Review: Emperor of the North Pole

Cast the hobo to the river.
Eric Millman 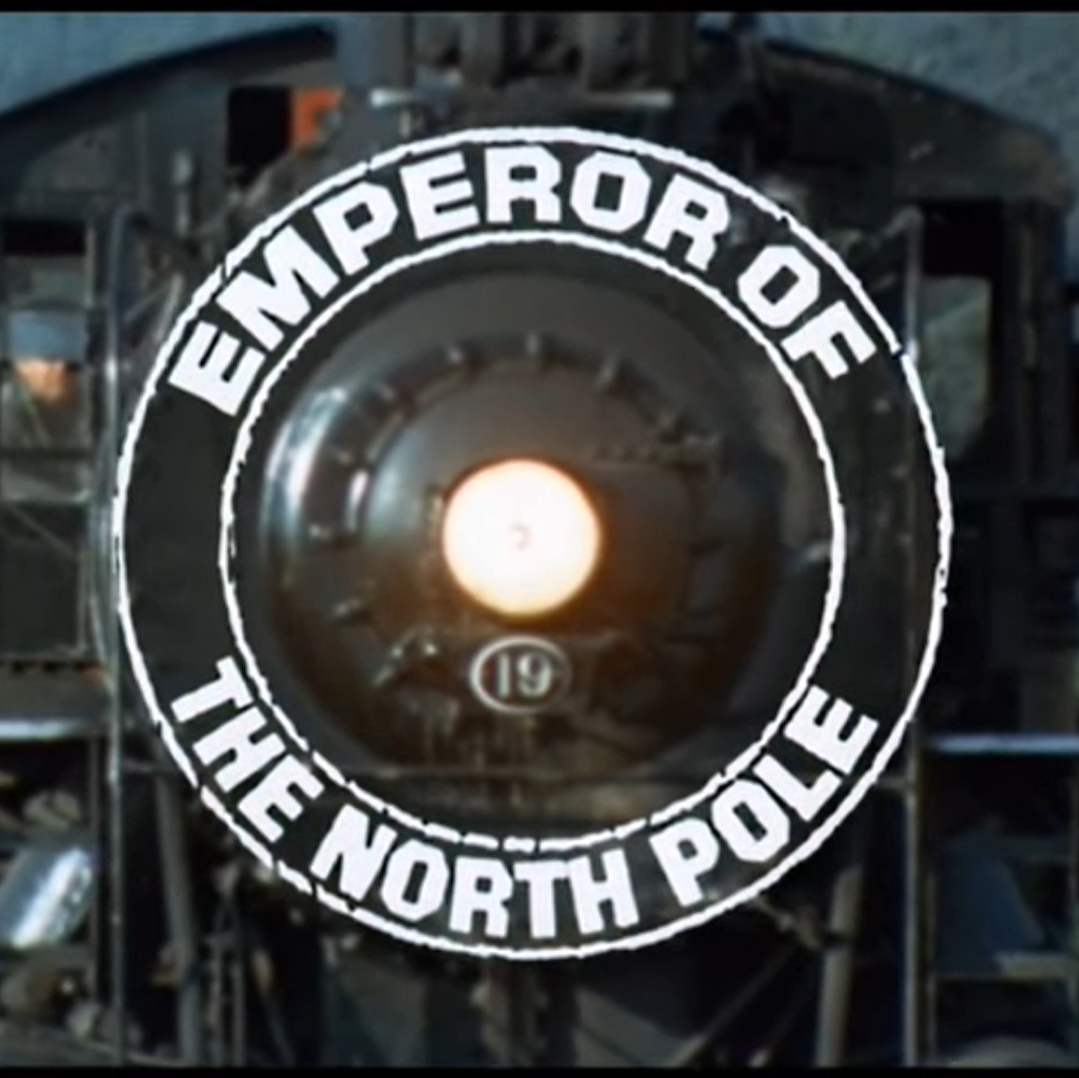 Title card from the trailer.

Well.  If you’re looking for a real man’s man movie, you found it!  Just a couple o’ boys riding the rails in Depression-era Oregon, drankin’ hooch, trying to stick it to The Man (so to speak).  This is a story of glory, glory for story, where men while away their days trying to outwit one another for no real reason other than to uphold some kind of illusory reputation amongst peers to whom they don’t seem particularly close.

Based loosely on the memoirs of Jack London his travels with the Leon Ray Livingston, king of the hobos, the film finds A-No. 1 (Lee Marvin) -- AKA “Emperor of the North Pole”, the President of Shitlandia -- makes it his mission to defy the balmy, sadistic conductor Shack (Ernest Borgnine at his sexiest since Marty) by hitching the #19 train all the way to Portland.  Shack, feared by all and loved by none, exists only to bludgeon hobos who try to ride without paying.  In A-No. 1, he has finally met his match, and only one man shall emerge victorious.

Filmed in 1973 by a septuagenarian Robert Aldrich, this film is seemingly a parable of the anti-authoritarian spirit split between generations.  On one hand there’s A-No. 1, a virtuous wayfarer who, like his rival Shack, is known and respected for a lusty commitment to his values.  Though his moral code exists outside of polite society, he is willing to sacrifice everything to uphold it, and for this reason he is A No. 1 and you are not.

Trailing A-No. 1 and dumb as a puppy is the young Cigaret (Keith Carradine, brother of David, who coincidentally had starred in Boxcar Bertha, Martin Scorcese’s Depression-era debut released the year prior), a fellow hobo determined to claim A-No. 1’s throne.  Two-faced and vain, Cigaret assumes the goal to ride the #19 without clear cause, power for power’s sake, risking the life of the elder vagrant who does his darndest to teach the damn kid a lesson along the way.

The issue, then, is that between the virtuously committed A-No. 1, the craven-but-also-committed and extremely attractive Shack, and the capricious Cigaret, the whole fight to the death is nothing if not pointless.  The #19 will make it to Portland: the fireman and his team keep the train running smoothly without Shack’s involvement, and indeed it is only when the conductor gets too involved in his hunt for hobos that any real harm comes to the #19 and her crew.  While Aldrich is sure to show that the cargo cars are only shown empty, leaving plenty of room for a few of the two million-odd jobless rail riders in America at the time, A-No. 1’s mission is presented without context or rationale: his goal of making it to Portland exists merely to prove a point, a point that very nearly derails the whole train.

Aldrich stakes his film on an empty cause, siding with A-No. 1 and The Old Way, leaving an imbalance between high stakes and a lack of payoff.  Unfortunately, it seems like this was made in and by the wrong generation: a wretched score by Marty Robbins, combined with sappy strings by Frank De Vol, undermine the grit and oversell the glamor (De Vol, I’ll note, scored The Dirty Dozen, Aldrich’s first and most famous collaboration with Marvin and Borgnine; he also provided the arrangement for “Nature Boy”, a song of the perdigiorno if there ever was one).

In the final shot of the film, the recently-victorious A-No. 1 can take no more of Cigaret’s opportunistic praise, and throws the kid from a moving train into a river.  This is just quite the power move, even for a guy who just fought an axe-and-chain battle to the death.  Ultimately, though, we are left looking down upon the floppy Cigaret, bobbing in the water, as A-No. 1 lectures his lungs out from the train.  Perhaps we’re meant to slap our knee and say, by golly, the old man’s still got it!, yet there’s something pathetic about him yelling, alone again and increasingly distant, at the closest chance at a friend he had left.  It’s as if all of this violent chest-puffing was pointless after all.  Yes, sure, A-No. 1 wins, but what’s he going to do once he gets to Portland?  Having finally conquered the #19, all he’ll have left is to drink himself to death, and maybe that was Aldrich’s point, cynical as it is.

On the surface, however, with its static panoramas of Dust Bowl Oregon, Emperor of the North Pole reads as little more than a love letter to the past, punctuated by absurdly delicious action scenes fought by some well-greased veterans.  Replace the constant ranting about freedom and class, though, with two full hours of Ernest Borgnine swinging a chain, or Lee Marvin swinging a chicken, and I’d be happy.  Unfortunately, and much to Aldrich’s disbelief, audiences failed to relate to the film’s values, whatever they may be, and the film flopped.

Best: Lee Marvin fights off a man and three boys with a live chicken.

Worst: Lee Marvin forcing a sad old cop to bark like a dog, and then take a slug of moonshine, much to the delight of his “friends” in the hobo jungle.  Screw the cop, yes, but also screw all those people hooping and hollering as the fat old guy nearly pukes himself.

"Fun" fact: Producers shortened the title to "Emperor of the North" so that audiences wouldn't confuse it for a Christmas movie. As such, it makes no sense.

Recommended pairing: If your friends stole your chicken, see if you can’t scare up a pigeon. Otherwise you’ll be stuck stewing dandelion greens with some barley and a flask of hooch.