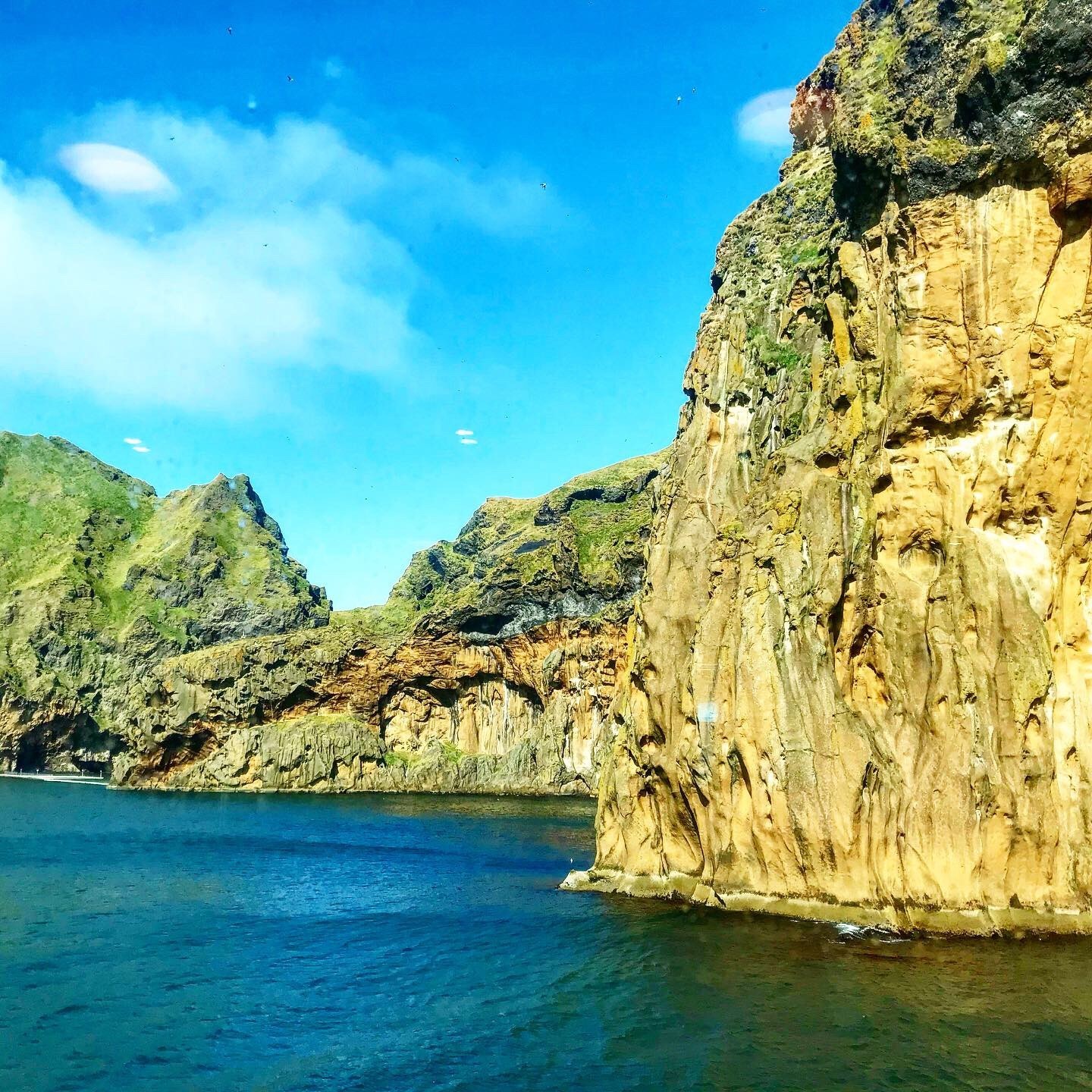 The verdant cliffs of The Westman Islands. Photo courtesy of the author.

The Westman Islands (regionally called Vestmannaeyjar) are a collection of remote, mostly uninhabited islands off the south coast of Iceland. These otherworldly archipelagos are known for intense jagged rock formations that are home to a plethora of birdlife. Among them, puffins are known to burrow and nest in the nooks and crannies of these austere pieces of land formed by underwater volcanic eruptions 10-20 thousand years ago. Only one island, Heimaey, is inhabited and can be reached by ferry from Landeyjahöfn. While many who have the chance to experience these glorious islands would say they took their breath away, I am able to say that they literally made me shit my pants.

Butterfish:those who have tried it, know to stay away. Although it melts in your mouth, acquiring its name from its buttery texture and rich, smooth flavor  and comes at a fraction of the cost of many other options—you will pay for it in other ways. Banned in Japan and Italy and highly regulated in many other countries, butterfish, otherwise known as escolar, can cause a multitude of issues for some eaters. These may include, according to Health Canada, "one or more of the following: the rectal passage of an oily yellow or orange substance (called keriorrhea), diarrhea, nausea, vomiting, abdominal pain, and headache.”  I was well-aware of these dangers having worked in a restaurant that served butterfish. What I didn't know is that this slippery fucker goes by many names.

Our trip was a family (my husband, 6-year-old son and myself) camping expedition, and the campsite on Heimaey was beyond beauty I can shape into words. We found a spot behind some rolling hills that doubled as hobbit houses and luxuriated in the backdrop of blue skies, Simpson clouds, a massive wall of verdant cliffs scattered with sheep and the swiss cheese-like sides overlooking the ocean with thousands of puffins soaring in and out of their cubbies. It was a warm day, so we walked into town for lunch and decided upon The Brothers Brewery, the only brewery on the island that had a cute bistro with outdoor seating. Always looking to take in the local offerings, I asked what the fresh catch of the day was. I should have shuddered with PTSD flashbacks when they described the walu as a “flaky white fish”, as that is exactly how we would describe the Butterfish to patrons at Karla’s in New Hope, PA (unless we liked them, in which we would tell them to stay the fuck away). Instead, I ordered it up and demolished it, and much like the abyss when you stare into it, the walu, in turn, demolished me.

Following lunch, we went to an interesting swimming area with numerous pools of varying temperatures from freezing cold to volcanically-hot. There was an area for kids and families that included waterfalls, pool, rock climbing walls and slides that culminated in a massive bounce pad that hurled you into space before dropping you into tepid water. My stomach had started to bother me but I assumed it had to do with being tossed around and screwing with my body temperature. I could not have been more wrong.

Back at the campsite, I found myself barreling to the only two bathroom stalls numerous times and started to recall the horrors I, many of Karla’s patrons, as well as the bathroom attendant, had endured as a consequence of butterfish. The non-stop, oily, orange sludge is unlike any other stomach ailment side-effect known to man.  But I hadn’t eaten butterfish. What did I order again? Walu? What is Walu?” As the night wore on, I found myself unable to sleep. Awoken by cramping and the urge to run for the toilets over and over, up and down the hills, the sheep bleating and laughing at me—until I decided to just stay. Just stay on the toilet and resign myself to the worst night of camping ever.

The next day I had promised my son I would take him on puffling patrol and to the rescue aquarium, Sea Life Trust, while my husband golfed. My stomach had settled a bit so we headed to the ports at sunrise. While we were out, the issues resurfaced and we got a tour of most of the bathrooms on Heimaey. With limited cell service, I was unable to research other names for butterfish but it proved to be inconsequential. While strolling past the tanks of rescued local fauna, buttcheeks clenched, I stumbled upon my nemesis. Each tank had a bubble that served as sort of a fish-eye lens to better view the wildlife. In front of me was a long, almost eel-like fucker staring me down—practically dancing. I looked to the placard next to the tank and there it was, “Walu, an escolar, sometimes known as butterfish.” I had unmasked my monster and it was mocking me.

We walked to meet my husband at the golf course (with a few more bathroom tours). Breathtaking views of green, rolling hills set against black sand basalt cliffs were at once hauntingly gothic and fairy-like. In awe of a natural composition so overwhelming, I almost forgot about my “situation”. I started to tell my husband that I was right—I had eaten butterfish! But before I could relay the tale of the squirmy asshole in the tank, my stomach began to roll as if a hundred marbles were on spin-cycle inside of it. I began to run towards the impossibly far toilets, but running was a precarious mode of travel. Speed walking offered a safer method of containment but wasn’t quite fast enough. Through the hopelessly beautiful and untainted stretch of earth, I urged myself towards my destination—only to fall short and taint the entire experience (along with my underwear). I walked away (awkwardly) with the knowledge of this monster’s many names, and I will share them with you now, dear reader. I urge you to withhold walu (waloo in Hawaii), snub snake mackerel, eschew escolar, oppose oilfish and spurn super white tuna—your gutty-works will thank you.

Carrie Dykes is a freelance wine and travel writer residing in the Hudson Valley region of New York.
Latest POSTS