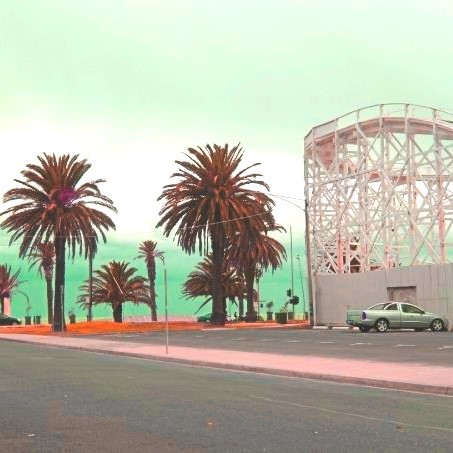 Around six in the morning, I’m hosing the sick off the sidewalk, half-asleep from a night of live music and Bundaberg rum.  The light outside is a quiet lavender; a belt of marine fog hangs over the sky.  In so many ways, it is quite familiar: a McDonalds squats assuredly at the mouth of the street, while the local bookshop peddles the non-native David Sedaris and John Grisham in the window display.  A gentle streetcar sneaks by, empty but on time, and up and down the restaurant-lined street, I see clean-cut, black-clad twentysomethings doing the same thing as I from their own restaurants.  Ostensibly, the joke was spot on: Australia was the United States, minus the cultural history and the violent crime.  Melbourne was a cleaner, better version of that.

Melbournians regard the suburb of St. Kilda for three things: Australian football, drunken tourists, and filth.  I chose it for the verdant grace of its botanical gardens, for the cramped, pointedly eclectic presence of its music venues, for the only beach in the city from whose magical black waters a colony of fairy penguins squawked the night away.  Or, I chose it because it featured the lone place of business in the entire city that would actually give me a job.

The doors open and Yum Yum shuffles toward me, his tongue wrapped like a fishhook over his ham-greased lips.  “Yum Yum,” he says with a gurgle, his voice worming out all chirpy and slobberish: “Yum Yum.”  He stops at the cash register and kinks his knees, his tattered jeans marionetting the floor, turns one-hundred and eighty degrees and shuffles on out, his voice reflecting on the glass door as he leaves: “Yum Yum.”

Within an hour I’ve got eight tables of six spread over two stories and they’re all begging for cocktails before my hangover can even kick in.  A regular sends his coffee back amidst this porridge rush and Ben, the manager, squeezes an ammonia-soaked rag into it before sending it right back.  Before I can question the morality of such a gesture, a customer complains about the state of the bathroom and I find footprints on the porcelain: another Southeast Asian tourist mistaking the throne for a squatter means there’s more shit to clean off the walls.

No one’s ever met the owner of this place, so we assume it’s Mafia-run.  Our head chef, Donato, an 80-year old Sicilian on his last leg, has disappeared and the orders are backing up.  I find him out back, smoking a cigarette and grinning hard.  He asks me in his mostly-forgotten Italian dialect if there are any girls out there he can stick his dick in; married for some sixty years, Donato is a proud sex addict.  I tell him, hey, I’ve got twenty orders up and can’t deal with this right now and maybe you should be in the kitchen just as the line cook, Rod, screams, “order up, you fucking wanker!  Get a move, gor blimey!” Rod is a planet-sized alcoholic Cocknet with sailor’s tattoos and a questionable past, prone to tearful fits.  Rumor has it that he once rang Ben at four in the morning, drunk and inconsolable, accusing himself of having “goddamned faggot thoughts,” but right now he’s mostly surly.  I get back on the floor and take another few orders, my fingers blistering against overheated plates.   Deep breaths.

Right on time, the bus from The Asylum arrives and spits out a troupe of old men in white gowns, skin melting in jowls, scars on their scalps.  One, a waifish, articulate man with chunks of flesh missing from his face, strokes my hair, which is dyed a faded red.  “Oh my,” he says.  “How lovely.”  In this neighborhood, a soft-willed American with pink hair has no chance.  My admirer’s friend, with a skull shaped like a beak, eyes constant slits, makes an unintelligible joke and the entire clan laughs, jelly-like, with a haunting shudder.  Their handler orders them a round of apple juice and shrugs his shoulders to me in solidarity.  Keep it calm.

Nearby, a scarlet-faced man seems to be bursting from within, his folds of skin flushed and flecked with capillaries, his nubby legs swaying from the barstool.  Shining with sweat, something oozing out of the corner of his crusty eye, he whoops, recalling his days as Jimmy Carter’s Australian bodyguard, wondering why we Americans so love our firearms. Leaning in close, sweat plopping on my shoes, he begs me to come over to his house for some “handiwork.”  After all, I couldn’t be making much in the way of a living working at a place like this alone, could I?  His voice is gentle, quavering, desperate, and once he makes perfectly clear the sort of “handiwork” he’s looking for, I give him a cordial grin and excuse myself.

By now a few more parties are seated, and the place swells with complaints.  “I didn’t order this thing that I ordered!” “Where is our meat?”  “This marmalade is cold.”  Ben relieves his stress by squeezing two bottles of chocolate sauce all over his face and under his tank top – singlet, it’s called out here – while screaming Madonna songs to himself.  His wild eyes flash like a man who has lost control.

At the door, Jodie waits all prim, looking much like a bunny taking a nap.  She claps her hands together when she sees me. “Oh, it’s that Pink-haired boy!”  She coos on about her long-lost horse with dreams in her eyes, hugging all the waitresses.  Though she was born to wealthy parents, they were both killed when she was still young and now she roams the street, lost and alone.   She hands me the forgotten fork she’d borrowed a month prior, promising then to have it back to me.  “I told you I would,” she says with a sheepish grin.  You might’ve guessed she were eight if it weren’t for the fact that she held the world’s oldest profession.

One of the waiters has slipped, dropping a pot of tea on his face: first degree burns.  Someone has stolen the tip jar.  Lord Earl Grey, always smelling of bergamot, his cheeks pinched back and shiny from too many face-lifts, calls me over to his table. He points to his pudgy, thirteen year old girl, and assures us we have much in common.  Lord Earl Grey winks suggestively and shovels a plate of soft-boiled eggs down his throat.

During my twenty-minute break, I grab a Subway sandwich, American as it is, to eat in front of the customers.  I think back to the stories I’d read long before I knew much of anything about this place, of the Aboriginal culture that roamed these lands some eighty thousand years ago.  I’d read of the journeys young Aboriginal men would take blindly into the Outback with little but their heritage to guide them. Tribe elders they’d meet along the way would teach them song after song to describe the ancestors who literally comprised the topography: that hill representative of the Great Rainbow Serpent, that valley cradling the dormant long-necked turtle.  Of course the Europeans came along and did their best to bulldoze all that, going so far as to name one of the country’s largest deserts after a guy who built washing machines, of all things.

I look around at the people who surround me, chomping and slurping and guzzling away like lunatics.  As if some American kid like myself could’ve made better sense of the place either way.

Dennis is out on the sidewalk dancing, arms swinging in circles, singing Hari hymnals, basking in the icy sun.  Like Rod, Dennis was once a Brit, coming over with his father some sixty years ago for some unspoken reason.  Now he’s homeless, selling street newspapers to anyone who stops to look at him.  Dennis loves to jig, smiling to his ears, wishing everyone a “grrrrreat day, love!” as they pass by.  Many of them see him in his bucket hat with his sunken eyes, hair white and worn, and think he’s just trying to sell another paper.  “Have a grrrrreat day, love!”

By four, the crowd will have died down a bit.  I go straight to the sidewalk and lean on a railing, catching my breath, and Dennis cheers me up with a wide-eyed joke.   He speaks of Buddhism and Taoism and always mixes in of a depth of appreciation for whatever mote of humanity he managed to scrounge up that day.  When I mention I studied cinema at university, he tells me of the music video in which he’d starred just a few weeks prior, surrounded by black-haired bikini models.  He is either starkly opposed to such superficial pursuits or he’s being completely sincere, but in any case, he’s always three steps ahead of me.  We make plans for dinner the next night at the vegan restaurant; he’s going to bring a friend of his that I will love.  He senses my reticence and my bullshit and my cynicism before I spew it out, and dances joyfully when the conversation grows too dark.  Sometimes I assume him to be the only sale person on this street.

Inside, Ben cleans chocolate from his inner ear, shaking his ass to the Amy Winehouse playing on the stereo.  Donato beckons me from the kitchen to pepper me with racist complaints regarding the Bengali sous chef standing next to him, but I change the subject to the meal he’s meant to cook.  He shrugs.  “You gotta fuck as many women as you can,” he reminds me in his language.

As business starts to pick up, Yum Yum shuffles in again, a dirty paper cup outstretched in both of his hands.  I scoop it full of ice and smile at him.  Somewhere in there was a wonderful person, I think to myself in a rare moment of positivity. Dennis is wearing off on me.  Yum Yum utters his phrase once more, a sort of nod of gratitude, I reckon, and then shuffles out like a gnome.

Finally, I ask Ben: “Why does he always say that?  What is Yum Yum?”  Ben once made the mistake of asking him the same thing.  In this instance, Yum Yum pressed himself against a glass wall, grabbing his crotch, and formed his fingers in a vaginal diamond, licking his lips fervently.  “Yum Yum.  Yum Yum.”

The customers pour in and out for dinner hour and the evening zooms past, but I am dead on the day.  They order spaghetti bow-log-nayse, their national dish, and guzzle bottle after bottle of Victoria Bitter or Carlton Draught.  Rod kicks his feet up on the bar and cracks open a Tooheys Old Porter.  My favorite.

Ben hands me a fistful of bills under the table for my time, enough for a week’s rent in shared bedroom nearby.  Outside, there’s an Aboriginal man – the first I’ve seen in person – and he’s pissing a jagged line on the wall, drunk beyond gravity.  I’ve heard that if one wishes to understand Australian history, one need only peer into the eyes of an indigenous elder, but this man’s eyes are mostly closed and the stench is too steep to approach.  “Fucking abo!”  Ben chases him away with a broom.  “Drunken worthless cunts, the lot of ‘em.”